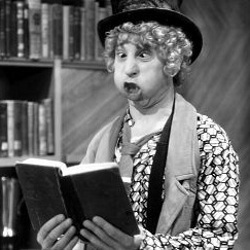 "Almost every one of the few individuals we meet in 1984 has, as his job, the rapid rewriting of the past, the readjustment of statistics, the overhauling of newspapers - as though anyone is going to take the trouble to pay attention to the past anyway.
This Orwellian preoccupation with the minutiae of 'historical proof' is
typical of the political sectarian who is always quoting what has been said and done in the past to prove a point to someone on the other side who is always quoting something to the opposite effect that has been said and done.
As any politician knows, no evidence of any kind is ever required. It isonly necessary to make a statement - any statement - forcefully enough to have an audience believe it. No one will check the lie against the facts,
and, if they do, they will disbelieve the facts."